Melody MacKenzie honors Chief Justice William S. Richardson in a Native Hawaiian Law Center article describing his work protecting Native Hawaiian land rights by citing Hawaii’s Kingdom Law. Many have noted– and continue to do so– that the application of U.S. federal law is like applying a square peg into a round hole. It is with great reverence that we should remember that it was Chief Justice Richardson who had contributed so much to the protection of native land rights of Native Hawaiians as well as the protection of traditional customs from the haole or “mainland” property owners through state law. As Chief Justice, Bill Richardson was integral to Hawaii’s statehood history and  for those who are interested, they should contact the Academy for Creative Media, and ask for copies of the interview. It was the intention of ACM that these transcripts be archived with the Hawaiian Collection at Hamilton Library, University of Hawaii, but I don’t think they have been deposited there yet. Many of the interviews are important to our understanding of the story of Hawaii’s statehood history, and it should be easy for students and historians alike to access them. I recommend people contacting ACM so that the 800+ pages of transcripts can be cataloged and held in reserve for public use. Academy for Creative Media University of Hawaii at Manoa 2550 Campus Road Honolulu, HI 96822 Phone: 808-956-7736 Fax: 808-956-6662 Email: acm@hawaii.edu

By DENNIS HEVESI
William S. Richardson, who as chief justice of the Hawaii Supreme Court for 16 years was a leading proponent of the rights of native Hawaiians, often relying on ancestral custom rather than Western common law in his decisions, died Monday in Honolulu. He was 90.
Enlarge This Image 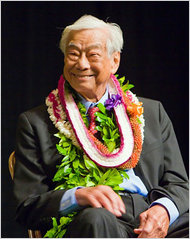 He died of natural causes, according to a statement by the William S. Richardson School of Law at the University of Hawaii. The establishment in 1973 of the law school — the only one in Hawaii — was one of Chief Justice Richardson’s proudest achievements, something he had long advocated. Chief Justice Richardson, who was half Chinese, three-eighths native Hawaiian and one-eighth Caucasian, presided over the court from 1966 through 1982. “His opinions came at a time when native Hawaiians were beginning what is called ‘the Renaissance’ — the rebirth of pride in native identity, language and culture,” the dean of the law school, Avi Soifer, said. “He helped trigger and embody that renaissance through his opinions and his role as a major leader in Hawaii.” Chief Justice Richardson had been a leading voice for statehood, and was also chairman of Hawaii’s Democratic Party and lieutenant governor from 1963 to 1966. In March 1966, Gov. John A. Burns appointed him chief justice. In perhaps his most famous case, Chief Justice Richardson in essence asked in 1968 why Hawaii should follow Anglo-American common law rather than its own ancient traditions regarding the use of property. The 4-to-1 ruling he wrote incorporated those customs in declaring all beaches in the state open to the public. Under his leadership, the court also established the water rights of people living downstream from privately owned property that surrounded rivers or streams. It awarded new land created by lava flows to the state, instead of adjacent property owners. And it ruled that native Hawaiians could cross private property to gather traditional cultural resources, like particular plants used by hula dancers as part of their ceremonies. Those rulings, Dean Soifer said, were “of a piece with his insistence that we should have a law school.” “He really fought for it,” he continued, adding that before its establishment “many haoles — or Caucasians — went to the continent for law school.” They were aligned with the corporations that dominated territorial Hawaii after annexation by the United States, he said, “and were threatened by the notion that a diverse population would have broad opportunity to go to law school.” William Shaw Richardson was born in Honolulu on Dec. 22, 1919, to Wilfred Kelelani Richardson and the former Amy Wung. Although his grandfather was an aide to Queen Liliuokalani — the last reigning monarch of Hawaii before the islands were annexed in 1898 — his family fell on hard times. Young William worked in pineapple canneries, earning enough to pay his way through the University of Hawaii and graduate in 1941. Two years later, he received his law degree from the University of Cincinnati. He then served in the Army, seeing action in the Philippines. In 1947 he married Amy Ching, who died in 1975. He is survived by his son, William; two daughters, Barbara Richardson-Phillips and Corinne Wolfe; two sisters, Amy Kahoiwai and Pearl Nishimura; six grandchildren; and two great-grandchildren. After retiring from the bench in 1983, Chief Justice Richardson was named a trustee of the Bishop Estate. The estate, bequeathed by Princess Bernice Pauahi Bishop in 1884, holds vast stretches of property in the islands. It is the financial foundation for the Kamehameha Schools, which the princess dedicated primarily to the education of native Hawaiian students. He became a trustee, Chief Justice Richardson said, “to finish the job of bringing the Hawaiian people back to their proper position here through education.”]]>